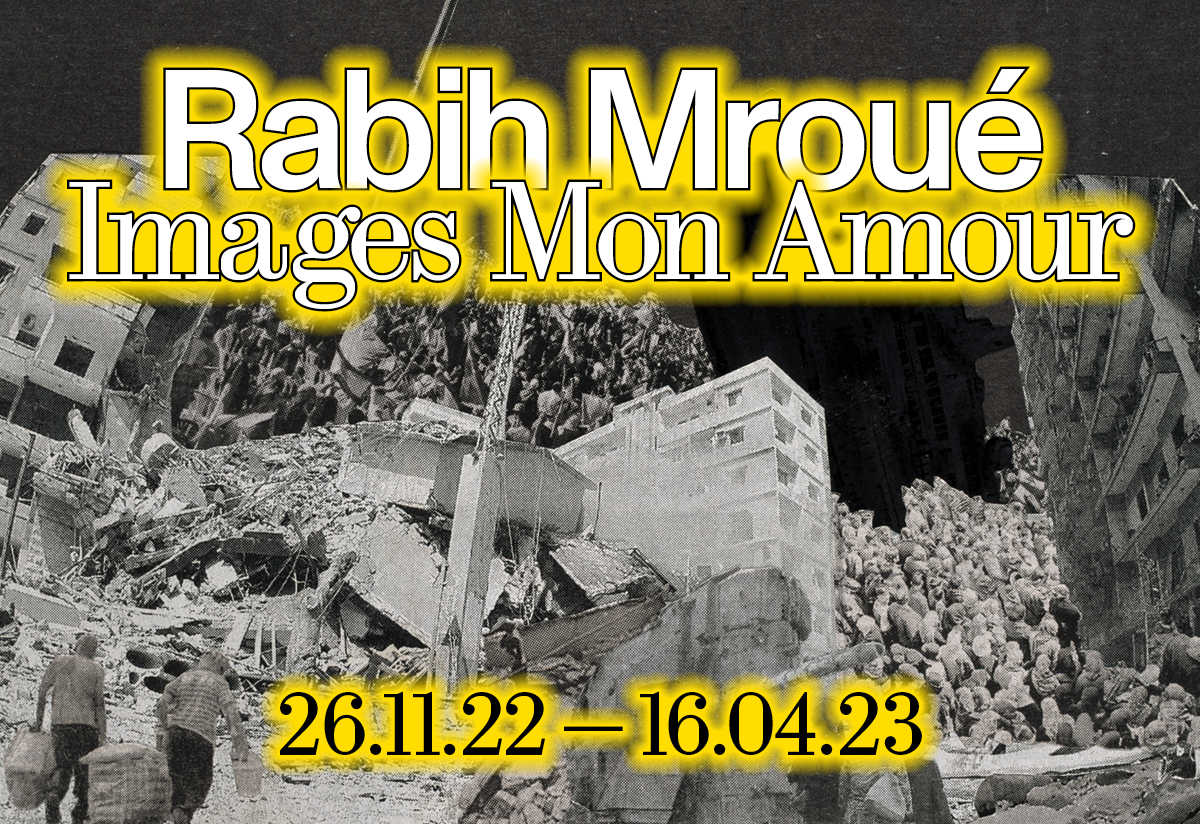 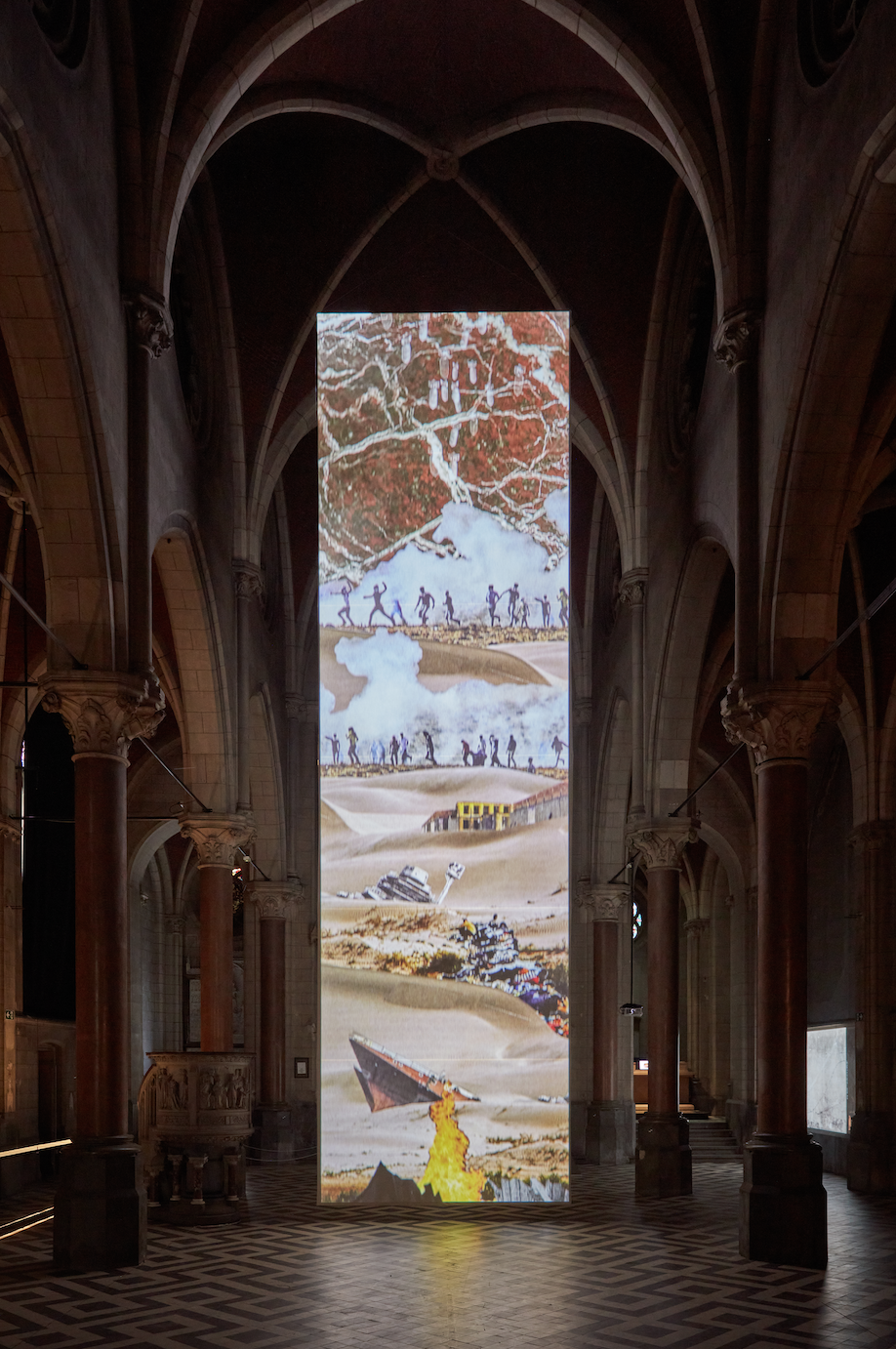 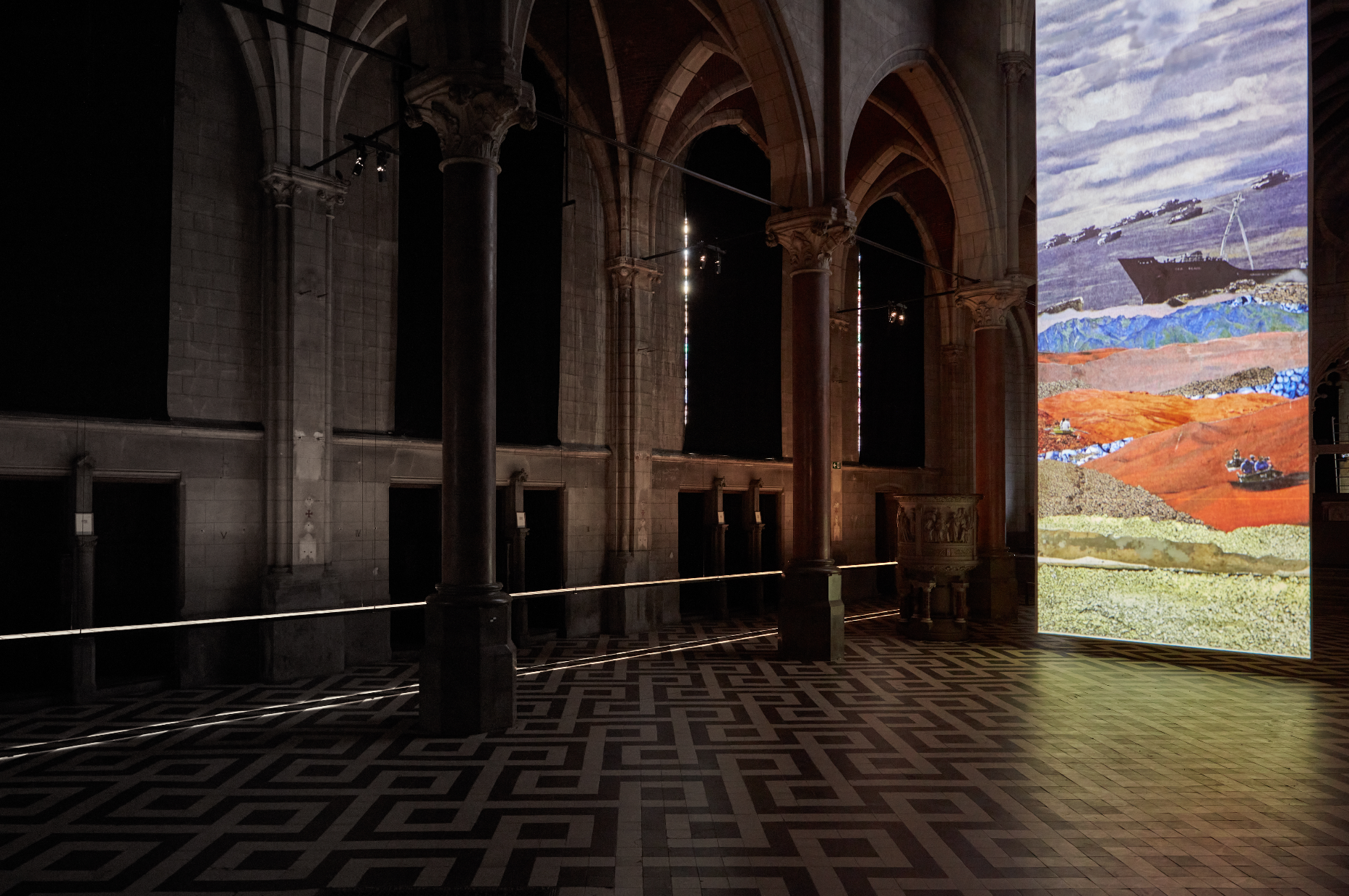 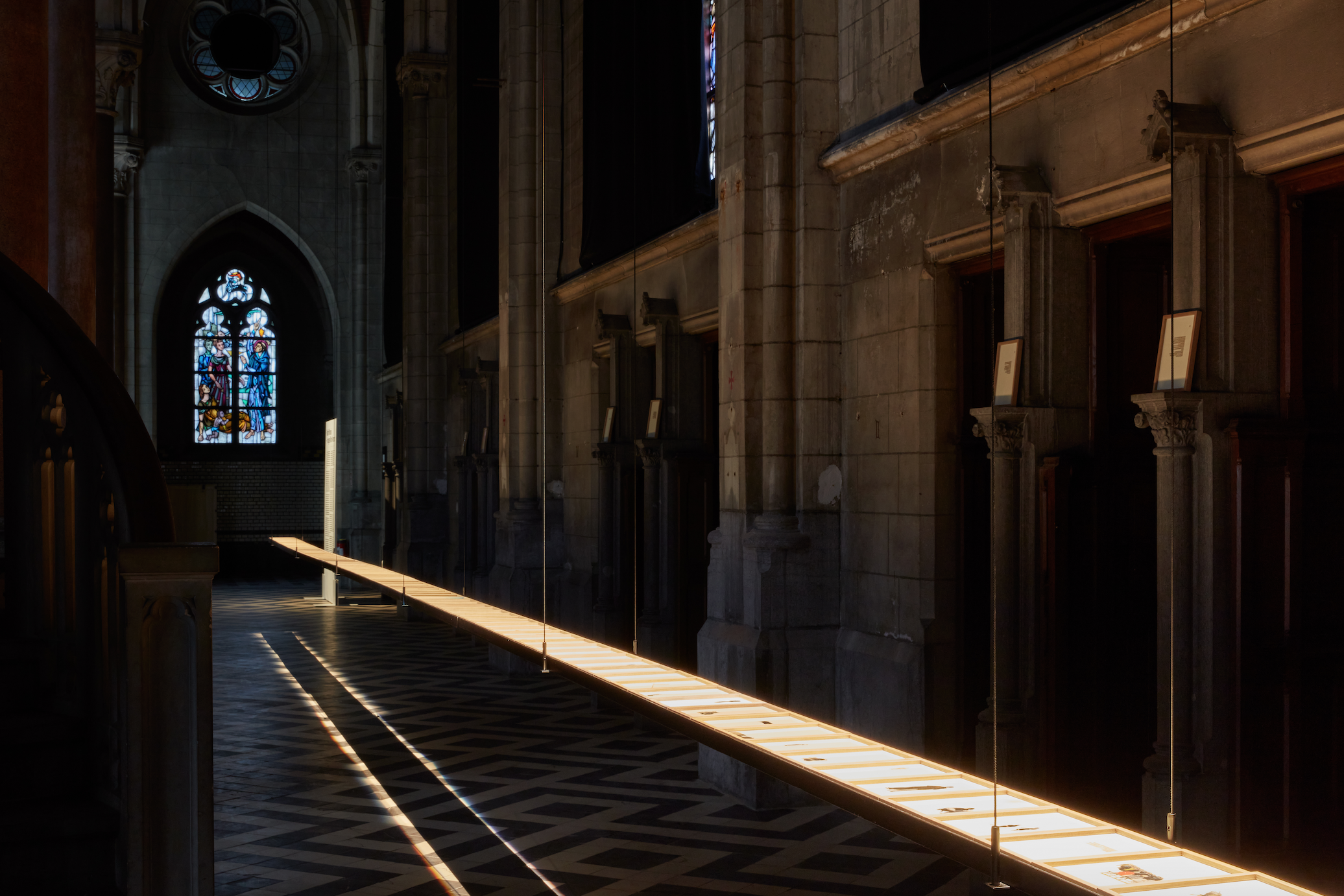 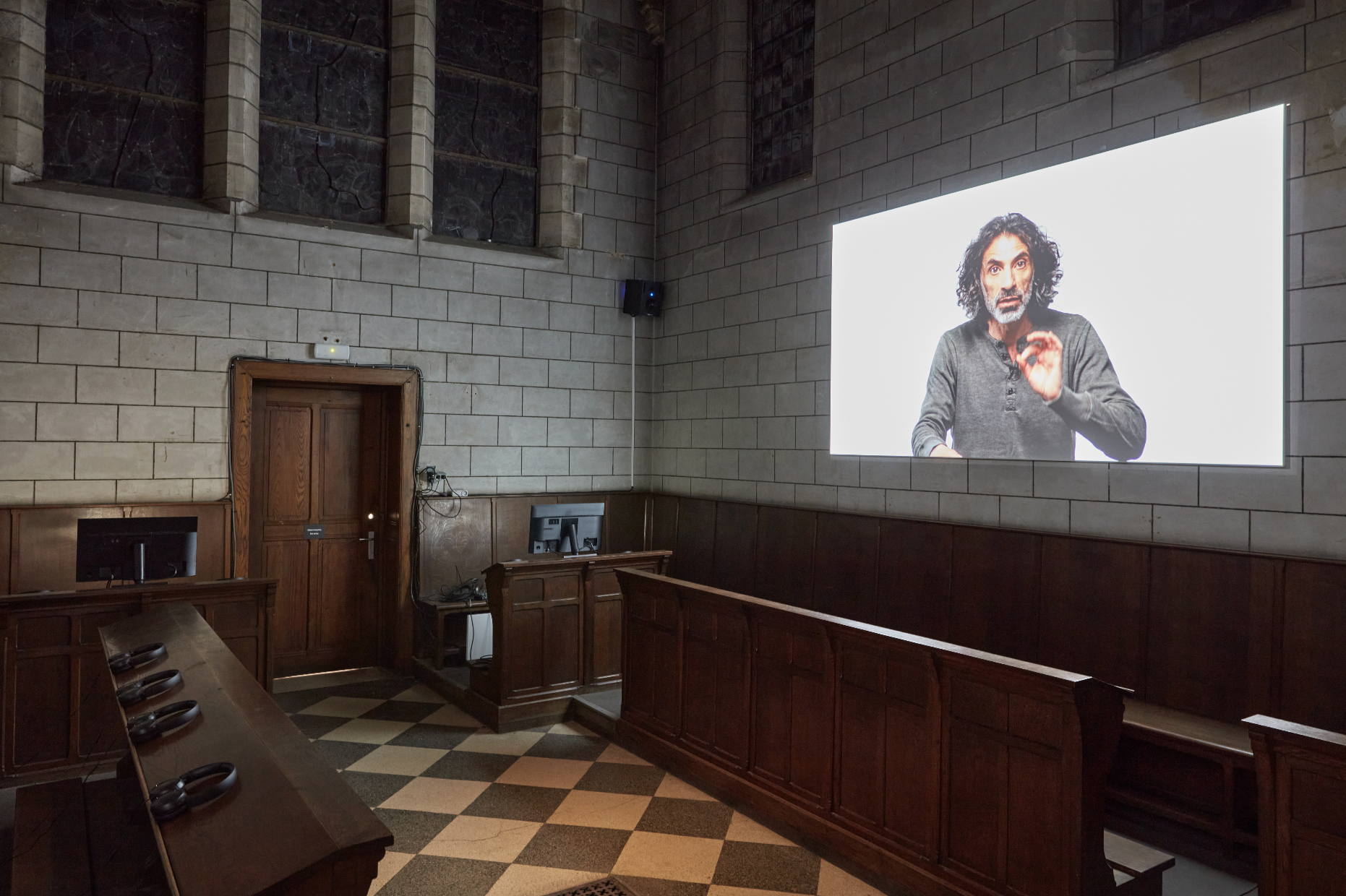 Images Mon Amour marks the first time Lebanese multidisciplinary artist Rabih Mroué (LBN, 1967) has held a solo exhibition in Belgium. Mroué's engaged art practice questions how images of conflict are used in media and how they influence our perceptions. With monumental video works, intimate sketches, sound works and collages of newspaper clippings, he offers an autobiographical and media-critical view of the world.

Kunsthal Extra City is housed in a former Dominican church. The impressive video work Images Mon Amourtakes centre stage in this architectural space. This survey exhibition brings together a dozen works, including Eye vs Eye, which was on show during dOCUMENTA (13), and three new productions. Mroué's accessible oeuvre starts with complex issues in the Middle East and translates them to be universally understood. In doing so, the artist asks fundamental questions about the role of the author and makes a plea for a pluralistic view of the past.

Mroué is best known in Belgium as a theatre director and for his groundbreaking non-academic lecture performances, but his practice is much broader and strongly autobiographical in nature. He grew up in Lebanon during the civil war, and although he has lived in Berlin since 2013, both his oeuvre and his engagement are still strongly intertwined with the region. For instance, he co-founded the Beirut Art Center and worked as a writer and director for a Lebanese television station for fifteen years. This nurtured his fascination with using images from news and the media in general.

'The past is never dead, it is not even the past,' said William Faulkner in his masterpiece Requiem for a Nun. A concept that has haunted Mroué for years. Many of his works start from a collection of hundreds of newspapers, issued between 2006 and 2016, that he gradually amassed. Newspapers from Lebanon, Syria and other Middle Eastern countries, which included reports on the 2006 Israel-Lebanon War, the start of the Arab Spring in 2011 and the war in Syria that followed.

The view of the world presented to us by the media is always central in Mroué’s work. He supplements his archive of newspaper clippings with YouTube clips of citizen journalists, military drone footage, etc. His work is about collective memories, but also about collective amnesia. The title of the exhibition refers to the film Hiroshima Mon Amour (1959) by director Alain Resnais and screenwriter Marguerite Duras. Much like this film, Mroué denounces the one-sided nature of historiography and redefines the viewer's position in it.

Artist walk by Hussein Shikha
During the Antwerp Art Nocturne