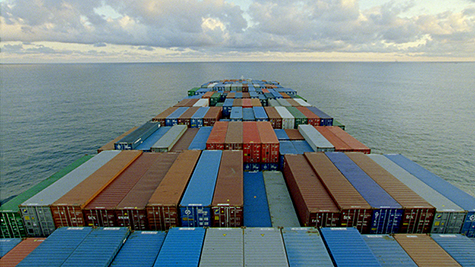 Still from The Forgotten Space, 2009. 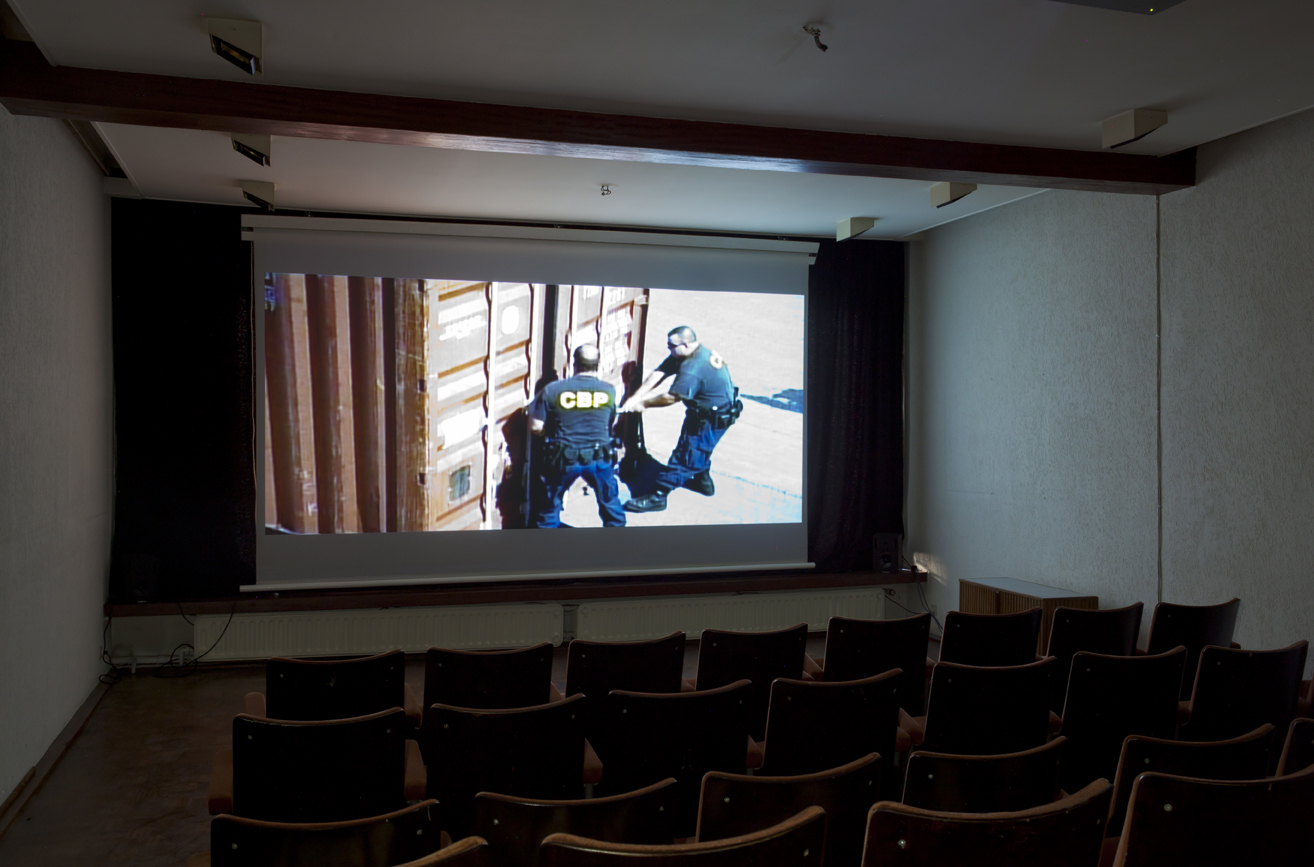 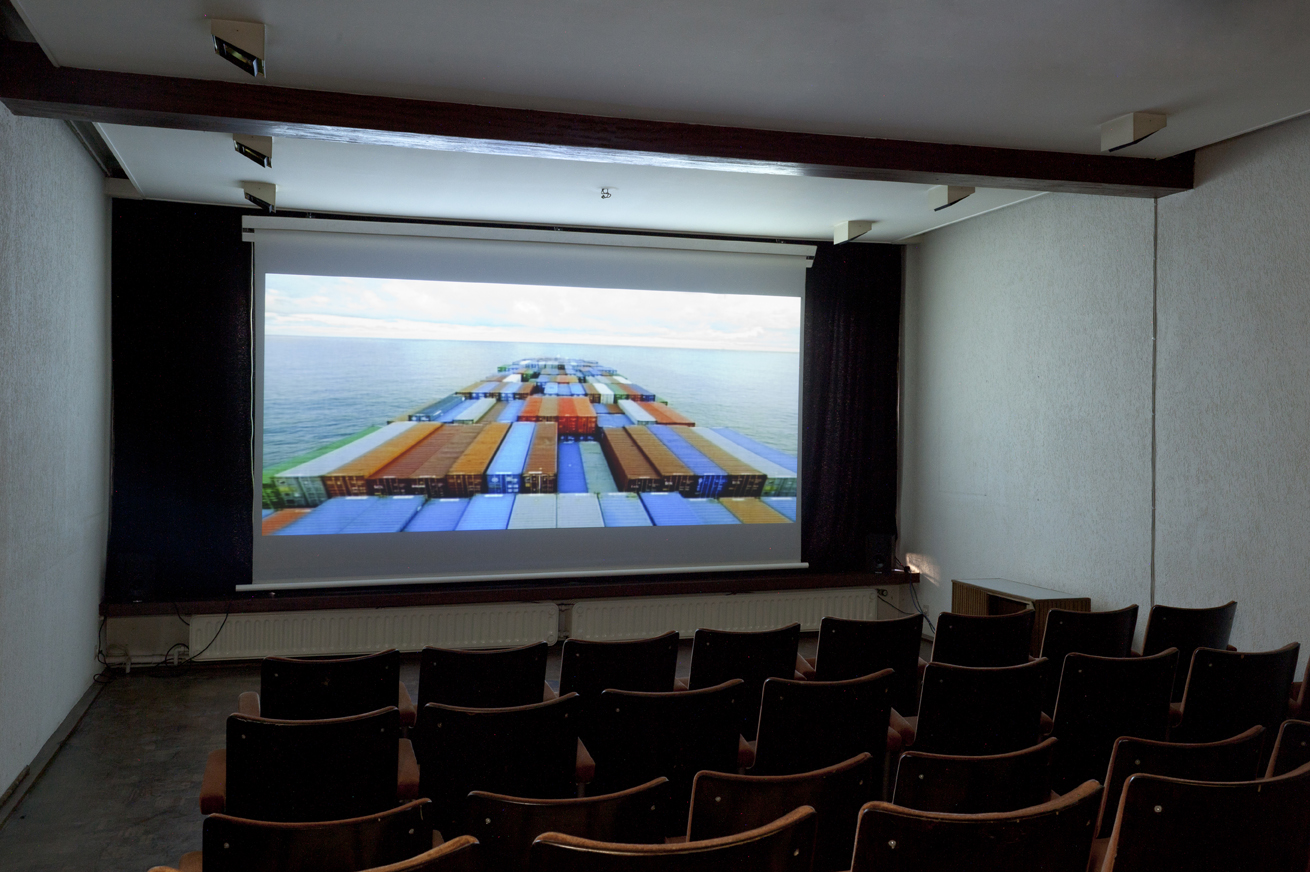 The cinema of Extra City Kunsthal is inaugurated with The Forgotten Space (2009), by Allan Sekula and Noël Burch. The film follows container cargo aboard ships, barges, trains and trucks, listening to workers, engineers, planners, politicians, and those marginalized by the global transport system. The filmmakers encountered displaced farmers in Holland and Belgium, underpaid truck drivers in Los Angeles, seafarers aboard mega-ships shuttling between Asia and Europe, and factory workers in China. The image of the sea that emerges from this cinematic study is neither a metonym for infinity, nor a metaphor of tempests occurring elsewhere in the world. The sea is a symbolically vacant inflation of functionality, propelled by the economic and political convulsions of globalization.

Excerpt from the directors’ notes on the film:

"To rule the sea is to ruin the world."

"Our film is about globalization and the sea, the “forgotten space” of our modernity."

"First and foremost, globalization is the penetration of the multinational corporate economy into every nook and cranny of human life. The contemporary vision of an integrated, globalized, self-regulating capitalist world economy can be traced back to some of these axioms of the capitalist “spirit of adventure.” And yet what is largely missing from the current picture is any sense of material resistance to the expansion of the market imperative. Investment flows intangibly, through the ether, as if by magic. Money begets money. Wealth is weightless. Sea trade, when it is remembered at all, is a relic of an older and obsolete economy, a world of decrepitude, rust, and creaking cables, of the slow movement of heavy things."

"Those of us who travel by air, or who “go surfing” on the Web, scarcely think of the sea as a space of transport any more. We live instead in the age of cyberspace, of instantaneous electronic contact between everywhere and everywhere else."

"In this fantasy world the very concept of distance is abolished. More than 90% of the world’s cargo moves by sea, and yet educated people in the developed world believe that material goods travel as they do, by air, and that money, traveling in the blink of an eye, is the abstract source of all wealth."

"Our premise is that the sea remains the crucial space of globalization. Nowhere else is the disorientation, violence, and alienation of contemporary capitalism more manifest; but this truth is not self-evident, and must be approached as a puzzle, or mystery, a problem to be solved."

"The factory system is no longer concentrated in the developed world but has become mobile and dispersed. As ships become more like buildings, the giant floating warehouses of the “just-in-time” system of distribution, factories begin to resemble ships, stealing away stealthily in the night, restlessly searching for ever cheaper labor. In the automobile industry, for example, the function of the ship is akin to that of conveyor systems within the old integrated car factory: parts span the world on their journey to the final assembly line."

"The function of sea trade is no longer a separate, mercantilist enterprise, but has become an integral component of the world-industrial system. We are distracted from the full implications of this insight by two powerful myths, which stifle curiosity. The first myth is that the sea nothing more than a reservoir of cultural and economic anachronisms. The second myth is that we live in a post-industrial society, that cybernetic systems and the service economy have radically marginalized the “old economy” of heavy material fabrication and processing. Thus the fiction of obsolescence mobilizes vast reserves of sentimental longing for things which are not really dead."

"Our response to these myths is that the sea is the key to understanding globalized industrialism. Without a thoroughly modern and sophisticated “revolution” in ocean-going cargo-handling technology, the global factory would not exist, and globalization would not be a burning issue."

"Ships are loaded and unloaded in as little as twelve hours, compared to the laborious cargo storage practices of fifty years ago. The old waterfront culture of sailor bars, flophouses, brothels, and ship chandlers gives way either to a depopulated terrain vague or – blessed with the energies of real-estate speculators – to a new artificial maritime space of theme restaurants, aestheticized nautical relics and expensive ocean-view condominiums. As the class character of the port cities changes, the memory of mutiny and rebellion, of intense class struggle by dockers, seafarers, fishermen, and shipyard workers-struggles that were fundamental to the formation of the institutions of social democracy and free trade-unionism fades from public awareness."

"The boxes are everywhere, mobile and anonymous, their contents hidden from view. One could say that these containers are “coffins of remote labor-power” carrying goods manufactured somewhere else, by invisible workers on the other side of the globe. We are told by the apologists of globalization that this accelerated flow is indispensable for our continued prosperity and for the deferred future prosperity of those who labor so far away. But perhaps, this is a case for Pandora, or for her more clairvoyant sister, Cassandra."

"Our film moves between four port cities: Bilbao, Rotterdam, Los Angeles, and Hong Kong. It visits the industrial hinterland in south China, and the transport hinterland in the heart of Holland. Of the four port cities, three can be classed as “super-ports,” the largest in the world. Here we encounter functional hypertrophy. Bilbao, a fading port with a brave maritime history, has become the site of radical symbolic transformation of derelict maritime space. In Bilbao, functional atrophy coexists with symbolic hypertrophy, a delirium of neo-baroque maritime nostalgia wedded to the equally delirious promise of the “new economy.”"