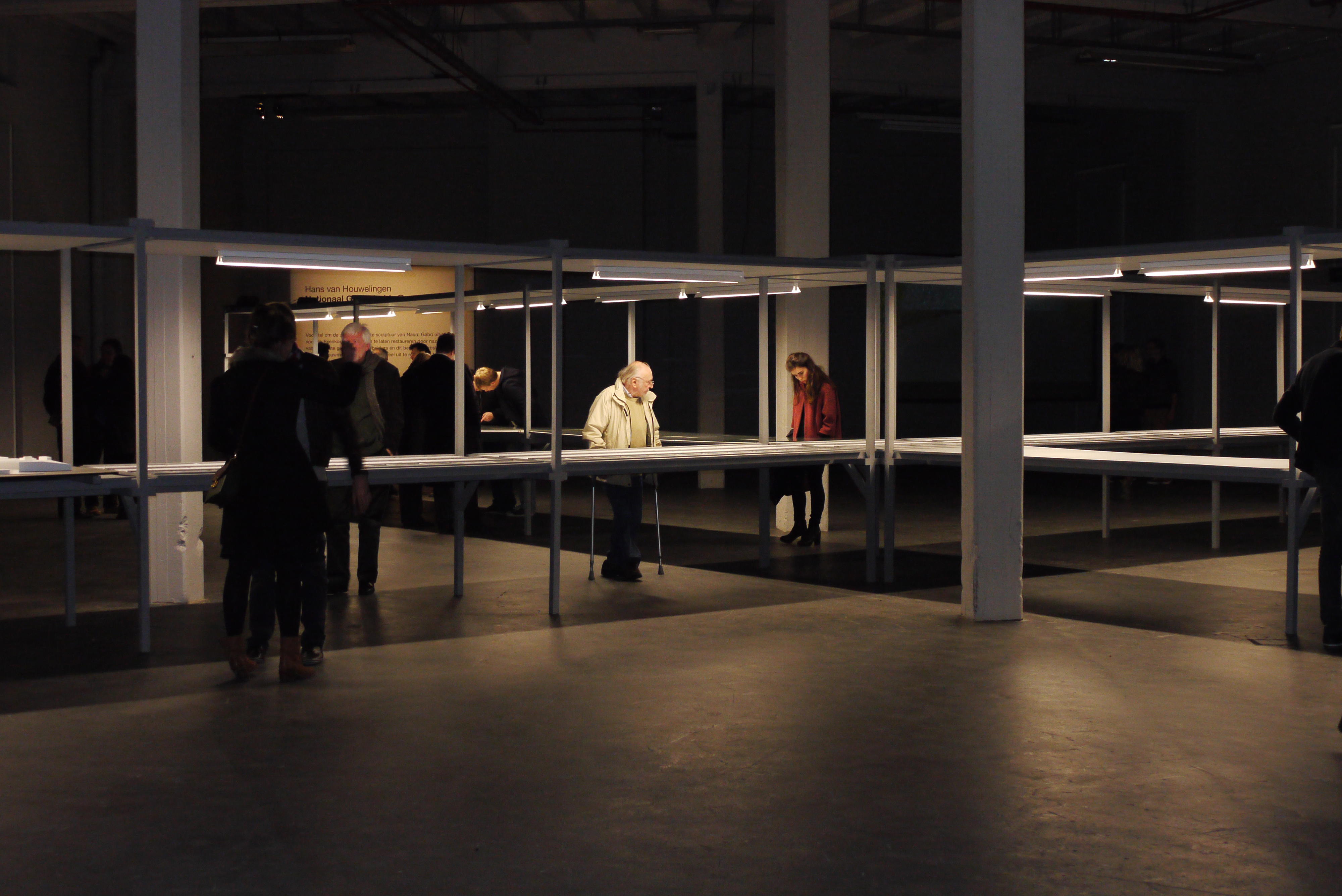 The exhibition introduces two remarkable artistic practices concerned with the dilemmas of public art in The Netherlands and beyond. Although belonging to different generations, and conceiving the political responsibility of the artist in distinct ways, the practices of Hans van Houwelingen and Jonas Staal are connected by a sustained polemic within the genre of monumental art, unravelling the political desires and anxieties that monuments thread together and ‘set in stone’, reopening the debates about recent history that monuments seek to terminate.

The artists engage the question of the monument overtly – without recourse to the negative prefix and ironic foil of an ‘anti-’, or ‘counter-monument’ – in a critical scrutiny of paradigms of consensus, modes of commemoration and their political instrumentality.

While both artists present three recent works, one point of continuity between these is the context in which the project of a National Monument for the Guest Workers in Rotterdam was proposed, vocally disputed and gradually abandoned. Van Houwelingen’s and Staal’s responses to this uncomfortable commission chart the full extent of a political spectrum animated by ongoing debates about the demise of the multicultural model in Northern Europe. These responses – Van Houwelingen’s proposal to restore a landmark of Rotterdam public art, the sculpture by Naum Gabo, from its dismally poor technical condition and re-script the narrative of its origin and ownership, and Staal’s inverse, unsettling glorification of the ‘real Rotterdammer’, dispossessed of his or her city by successive waves of immigration – sit in opposition but also in a disquieting complementarity. They articulate the contradictory aspects of the monument against a political discourse premised on ideological disjunction and the rapacious calculation of votes.

Hans van Houwelingen also presents Sluipweg, a footpath made of over 300 disinterred tombstones, circling the ramparts of Fort bij Vijfhuizen – a defence outpost where no war was fought, rendered obsolete by advancements in military technology at the very moment when it was to be inaugurated. The place of a history that never came is now traversed by the material traces of hundreds of anonymous destinies consumed elsewhere and vanquished in other battles. Sluipweg confronts the visitor with the haunting auraof a war memorial, yet here the trauma does not precede the memorial – they coincide in the same image and timeframe, disrupting the metaphysical armature of the discourses that make sense of death: that elevate death so that it is fully separated from life.

What’s done… can be undone! was proposed in response to a commission from The Hague for a monument to Johan Rudolph Thorbecke, founder of Dutch parliamentarianism. At roughly the same time, and possibly as a consequence of roughly similar processes of political or cultural branding, the municipality of Amsterdam was discussing a monument to Baruch Spinoza, purported founder of the city’s image of freedom and individualism. Van Houwelingen proposed a trade-off, as each city held the statue the other desired. The historical motivations for the exchange of position, the mathematical precision and the symbolic resonance of the displacement outline an economy of the monument genre, where nothing needs to be built, all the elements necessary to enact the scenario of remembrance exist, and only need to be reconnected in a different equation – rearranged like the pieces of an identitary puzzle.

Jonas Staal shows a project commissioned by the residents of Maastrichtsestraat in The Hague, to commemorate the deportation of 16 Jewish families that lived on the street during World War II. As opposed to a conventional scenario where the task of remembrance would be delegated to, or be externalised into a marker that remembers on our behalf Jonas Staal proposed changing the name of the street into ‘Deportation of Sixteen Jewish Families Street’. This would not just entail a switching of the street sign, but would materialise in the residents’ prolonged efforts to persuade the local authorities to modify all entries corresponding to the street in the archival filing systems of the municipality: an act of commemoration translating into a long-term, demanding process of bureaucratic readjustment.

Jonas Staal also presents the third episode in a research project titled Politiek Kunstbezit (Art, Property of Politics) which surveys the relation between art and politics ‘at the other end’, investigating forms of artistic behaviour within the Dutch political class. This wryly reversed museology has delved into the art collections of Rotterdam political parties, examining the convergences between ideological positions and the artefacts collected, and explored the ‘Freethinkers’ Space’, an improvised exhibition space set up in the Dutch Parliament to demonstrate through art the coexistence of incompatible political views.

If the politician as collector or curator was the subject of the first episodes, the project Art, Property of Politics III. Closed Architecture consists of a model based on a text by Fleur Agema, architecture graduate and prominent member of the Dutch populist party PVV (Freedom Party). The 350 page long graduate dissertation describes the project of a prison. This is a complex facility for reinserting convicts into society through an elaborate sequence of disciplinary spaces and norms. The artist assigned herself the task of fleshing out this vision from a text that reflects on punitive and re-educational strategies, with ample implications for ideas of the health of the social body and the boundaries at which normality needs to be defended.

Until the 11th of December, the exhibition Hans van Houwelingen: Until It Stops Resembling Itself, curated by Mihnea Mircan, is on view at Stroom Den Haag.

For this exhibition, the publication Undone has been produced. The volume contains contributions by Mark Jarzombek, David Riff, Jonathan Dronsfield, Gerald Raunig, Marina Vishmidt, Julia Bryan-Wilson, Brian Dillon, among others. It is designed by Metahaven and published by Jap Sam Books.

The publication has been made possible by the financial support of Stroom Den Haag, Extra City Kunsthal Antwerpen, Fonds BKVB, the Mondriaan Foundation and Stichting Stokroos.

The publication has been made possible by the financial support of Extra City Kunsthal Antwerpen, Context is the Message, Stichting Onomatopee, Eindhoven, Centrum Beeldende Kunst, Rotterdam, the Mondriaan Foundation and the Fonds BKVB.

The exhibition has been realized with the kind support of the Mondriaan Foundation, the SIR (Sculpture International Rotterdam), Koninklijk Bijenkorfarchief and N.V. Hollandia